When talking to dozens of business leaders & managers every day, we often come across the opinion that anonymous feedback is bad. Evil. That it should not be encouraged - or even allowed. Many believe that a good manager, as well as an employee, should be able to give direct feedback face-to-face and that anonymity breeds mistrust. Some are even worried that people will be too honest - wait, isn’t that the whole point of feedback? Sharing our honest view on someone or something?

This is not to devalue all the benefits of in-person and direct feedback, but to shed light on a simple well-tested concept that in some cases, anonymity allows people to express their views more openly, without the fear of hurting someone, their relationship – or even worse - repercussions. On top of that, in situations where anonymity is assured, people are more inclined to participate in the process (think higher participation rate in engagement surveys).

What managers have to say

Of course, managers have many good reasons for their polarized attitude. They want to support their people in being open. They want to encourage them to stand up for their opinions. They want to build and develop a feedback culture where there’s no place for finger-pointing under the protection of anonymity. Many insist that they want people to tell them things straight – many even believe that they do.

By holding the role of a manager, you possess different traits, competencies, and pre-requisites to differentiate good (desired) behaviors from the not-so-good ones. Your pervasiveness, assertiveness, and verbal agility belong among the reasons why you became a manager in the first place. Therefore, the feedback comes much easier to you – which is also why the perception of the need for anonymity is often black and white among people in management.

What employees have to say

Employees, however, tend to have a different view.

You as a manager have - hopefully - asked for your people’s views many times. How many improvement suggestions did you receive? Not many? Does only positive feedback mean you have nothing to work on? Absolutely not.

You need to understand that your people are not as confident or assertive as you would like them to be. Some have bad experiences expressing their opinions while some are too afraid by nature. And let’s face it - very few people will ever succeed in a potential clash with their manager. Some will retreat before the authority and powers of their supervisors, and no one wants to end up wearing the "troublemaker" label.

Feedback for ordinary people is not easy, even if it does not directly concern their superior, but even just colleagues.

Feedback for ordinary people is not easy, even if it does not directly concern their superior, but even just colleagues. Unlike managers, most do not undergo any specific ‘how-to’ training or systematic development program. They may be worried about the emotions (their own or those of their recipients), they may be afraid of not being able to skillfully formulate their thoughts, and that this whole exercise might not bring them anything other than problems.

Their experience often tells them that feedback is a bit like Pandora's box. You never know what’s going to happen until it’s too late and you’ve opened it. People are not machines. People are powered by emotion. And their responses, even if they’re trained, vary significantly.

In addition to the emotions already mentioned, there is a common practice among the feedback recipients to explain whatever the matter is that they’re receiving feedback on – or in other words – defend themselves. They will explain why they behaved one way or another, what the reasons were, and that there was no other option. This might make you an accomplice, feeling like an idiot that you evaluated the whole situation incorrectly.

Accusations are yet another reason (how could you?) why people withdraw from sharing their feelings. Sometimes, people demand hard evidence. Other times, you might end up learning that it’s actually your fault and you’re the problem – or that neither you are perfect.

That similar things don't happen to you? You are one lucky exception. In any case, the situations described above and their variants are the reason why people sometimes prefer to bite their tongue rather than to give open and specific feedback.

As it turns out, anonymity doesn’t offer security to feedback providers only, it also gives the recipient space to process the inputs, and freely decide what to do with it.

While on-spot personal feedback creates pressure to respond immediately, anonymous one allows you to do nothing. Nothing immediate. Taking time to process it, come back to it, focusing on the essence rather than the awkwardness of the moment. 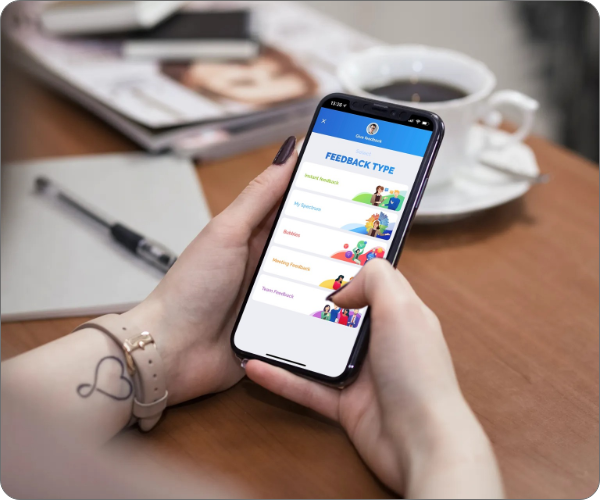 What data has to say

Managers' fear that anonymous feedback may become a popular tool for haters often stems from social media experiences or posts under articles in online media. Such contributions tend to be derogatory, offensive, using offensive language or vulgarisms as arguments. However, it is important to be aware of the context of such messages and the motivation of these contributors. Their goal is usually only to vent their overpressure without expecting that this will lead to something tangible. The goal is the outburst itself.

By contrast, the objective of retroactive in the job is usually to achieve some change, correction. It's not about shouting accumulated emotions or frustration. Also, the dictionary and the form of expressions used in the work are very different.

Experience with the use of online feedback tools within the corporate environment simply shows that acute and inappropriate reactions in the job are quite exceptional and rare. And if they appear, it's more like the tip of an iceberg that would otherwise exist anyway, just hidden.

The possibility of anonymous reactions significantly increases people's involvement as well as the frequency and amount of feedback.

In addition, it turns out that for some topics, anonymous feedback is perhaps the only way to handle them. This applies to all things that are uncomfortable to tell people in person, things that could greatly disrupt coexistence within a team. Paradoxically, such sensitive topics also often include the appreciation and praise of others.

As a prevention against adverse reactions within companies, tools with structure and proper form leave very little room for incorrect formulations and guide its users through a professionally prepared curriculum.

In a nutshell, anonymity has its space in feedback culture. Rather than offering haters a platform to express, it provides security for openly sharing opinions and feelings without fear of exposing feedback to myself or the recipient to an awkward situation.

You stink, aka advanced feedback for connoisseurs

Building a Performance Management System Fit For the Future

How to give corrective feedback remotely

Do You See Me? Recognition In the Remote Age.

Get the latest news straight into your e-mail